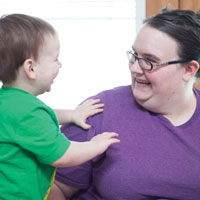 Kelly was preparing for an exciting time for her family. Her three-year-old son, Nathan, was thriving, and the due date for her second child to be born was fast approaching.

But tragedy struck when Kelly’s apartment caught fire. She had time to rescue Nathan from the flames, but the family lost everything. Fourteen hours later, Kelly gave birth to her son, Michael.

Kelly didn’t know where to turn. When she was in the hospital, her nurses recommended Parent Pals.

With help from Parent Pals, Kelly and her family were able to move into their new home one week after the fire. The Parent Pals team helped Kelly and Nathan find a therapist to support them through their trauma following the fire.

Today, Kelly and her two sons are happy and healthy, thanks to regular home visits from their Parent Pals worker.